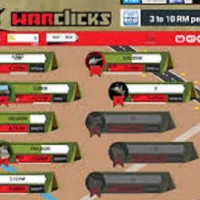 War Clicks is an interesting action game. You will participate in building your army, train them and join the battle. You have two modes: boot camp and two are war zone, these two modes will support each other.
Boot camp is a mode of building and training the army, you will participate in building your army, training them. Click on the car to train, after reaching a certain number of points you will buy other upgrades. Unlock lots of new units, upgrade production, deploy units to fight. You can buy a trainer that will do all the work for you even if you have coached the mighty army.
You can then switch to the war zone mode to battle enemy armies across countries. Join the battles for glory and looting, complete to empower your army and repel enemies for the country.
Through various activities and completing missions, you will receive gold, which will give you more power to produce Boot Camp as well as improve the strength of your army. Try to train a mighty army.
Create lots of points to increase the purchase of upgrades, strengthen your army and participate in battles to strengthen the status and reputation of the army. Try to become the strongest army, with a large number and win on all fronts.
The game is suitable for military lovers, and the gameplay is extremely simple so it is suitable for all types of players.