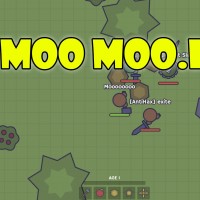 MooMoo.io
MooMoo.io is a free 2D multiplayer game with a top-down perspective. The goal of the game is to survive for as long as possible in dangerous areas against many animals and enemies of the enemy. This can be achieved by mining raw materials and improving player equipment.

Territorial battle has begun! People frantically gather all these resources, like food, wood, iron and a handful of other resources, to build a vast and prosperous kingdom. Join the game and play at your own pace. Collect resources on the map to build the village. Over time, your windmill will earn points. Be sure to protect them from other players by building obstacles or even explosive mines! Once the village is built, stay close to the village to protect it anytime! Be happy

Weapons in the MooMoo.io game
The MooMoo io game contains 19 weapons, these weapons have 3 basic groups and more variations. The following list provides a list of them and links to detailed information about each weapon and its existing variants.