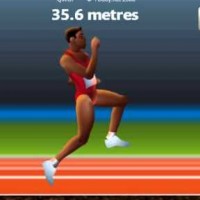 QWOP is the hardest game ever. The athlete plays an athlete named "Qwop" and he is participating in the 100m Olympic. Players only need to use the Q, W, O and P keys to control the athlete's foot movement to move the character forward while avoiding falling. The Q and W keys control one of the runner's thighs, respectively, while the O and P keys operate the runner's calf. The Q key pushes the right thigh of the runner forward, the left thigh push back and the W key also affects the thigh and vice versa. The O and P keys act like the Q and W keys, but like the runner's calf. The actual amount of joint movement is affected by drag caused by the force exerted by gravity and inertia.