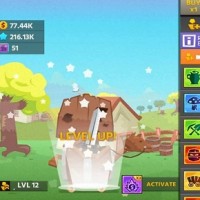 Hero Simulator Idle Adventures is an updated version of the original Hero Simulator. In this emulator, you have to upgrade your hero all the time. Cederic had defended the territory for 300 years but now he is old and needs someone to take over for him. He chose his son to be the successor. As a newbie, you're not ready and you have to help him prepare for this task. Over time, your character will evolve from a fledgling warrior and weak tactics into a stronger warrior, with better tactics.
Offering military tactics and sword skills to help defeat warriors and evil creatures of all kinds. You can unlock hundreds of skills, tools, weapons and abilities for your character. Use weapons made from blacksmiths and powerful components from alchemists to fight against vandals and fight against dragons.
You will become a hunter or be hunted. Get ready to meet your hero fate. Become a real hero.
The game has a lot of options and at first it may seem a little confusing, but with a bit of perseverance, you will better understand this game, which turns out to be very addictive.
Can you create the perfect warrior to meet all the challenges in this completely chaotic world. I believe you absolutely can do this.
Fight to prove to everyone, to yourself and to your father, to prove to them that you are completely worthy of what your father has entrusted.
The game is a perfect combination of beautiful interface, vivid sound and extremely interesting gameplay that will bring players many surprises. Currently this game has been developed widely around the world with a large number of players.

Hero Simulator Idle Adventures is played using the mouse to complete every challenge in this chaotic world. Left click to control your character, join the battle and make upgrades.