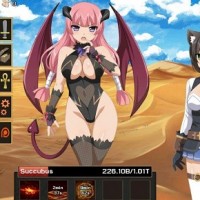 Anime Clicker is an adventure game genre. Fight, train, and identify your opponents to defeat famous anime characters and video games. Can you defeat the last enemy and become the strongest warrior of the universe? Defeating anime characters to bring peace to the universe, unable to keep the war going on, the longer it lasts, the more damage both people and properties will lose.
Train your anime character and help him form by optimizing a set of power and multipliers. Then fight against other characters to become the strongest warrior of the anime universe.
Buy upgrades to power up your anime, the stronger it is, the higher the fighting ability, the faster the destruction of other anime.
There are many levels, each level will appear different anime and the enemy anime will get stronger so your anime must get stronger. Defeat over 100 anime characters, find and destroy legendary enemies and challenge bosses.
This is a leisurely click game, it will help you relieve stress, fatigue after a long working day, helping you kill time while waiting for someone.
This game also requires you to persevere and plenty of time to pass the level.
The free of the game has been beneficial for the players, they do not have to pay any cost except the internet but can still play the game day by day.
Because the game is completely free, it will ask to run some ads when you play, just let the ads run for a few seconds and then turn it off.

How to play Anime Clicker

Anime Clicker is using the left mouse button to play. Click and create your own anime characters to destroy other anime and make upgrades. The more you click, the more you will benefit from this game. Wish you will have fun relaxing moments at our website.