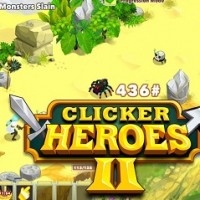 Clicker Heroes 2 is a feeling game that has incredible power. You will start a never-ending journey to defeat mythical creatures, discover many new lands. Various upgrades of this series are still being developed

Jumping from one area to another to defeat monsters, buying equipment and upgrades will help you reach higher areas. When you are strong enough, move from one world to another, where you will find stronger monsters and unlock even better upgrades! Unlock more advanced skills to help you kill monsters faster. Massive clicks, Large Clicks, Multiclick, ... Conquer new worlds and defeat their unique monsters to find more gold and experience! Customize Auto Program to play games for you when you're away. Automatically boost your equipment, buy new equipment, and create complex skill combos. Maximize your efficiency by creating complete automated processes.

Every journey ends but with Clicker Heroes 2; your story will be one of the most extended novels. Challenge yourself when you try to defeat monsters as quickly as possible. Hire help and see your heirs as they fight monsters under your command. Move between different areas and explore many levels. You can experience the latest, most exciting Clicker Heroes versions here

Clicker Heroes 2 game is an addictive and cute click game. Defeat countless monsters and collect gold coins to hire some evil heroes who will support your work. Very interesting!

Clicker Heroes 2 is available as a web browser game, as an Android game, and as an iOS game. It can also be found on Steam since May 2015.

You use the left mouse to play Clicker Heroes 2 game

Heroes are the playable characters in Clicker Heroes 2. The begin, there is only one available hero, but more heroes might be added in later versions.

Equipment is the primary way to make progress in Clicker Heroes 2 easier. You can buy Gold in the down-left corner of the screen. And it will usually increase damage along with a positive side effect on something else.

Every 10 levels, you will be an additional multiplier for the separate piece of equipment. These multipliers are listed below.

Energy used to make clicks to damage monsters. The game shows two numbers, the Current Energy and the Total Energy.

The Total Energy is the maximum amount of energy the player can have at once.

The Current Energy is a number between 0 and and the Total Energy. This energy will decrease by 1 when the player clicks on a monster and increases by 1 when the hero attacks the monster passively.

Energy is restored by 1 point when hero attacks passively. You can buy the Synchrony upgrade from the Skill Tree so that the hero can automatically attack or while skills are waiting to be activated.

The Skill Tree is displayed on the left of the screen. There is a sub tree where the automator skills are located. The automator tree uses points that you unlock by spending skill points.

The types of things you can spend points on are:

The Automator tree is where you will be able to unlock:

Monsters are creatures in Clicker Heroes 2 game that can be fought for experience points and gold.

Mana is used to activate certain abilities. The game shows two numbers, the Current Mana and the Total Mana.

The Total Mana is the maximum amount of mana the player can have at once.

The Current Mana is a number between 0 and and the Total Mana. It will be increased by 5 after every minute and decrease when some skills are used.

A clickable (or "Clickable Treasure") is an item which you can be clicked on to get a bonus, like gold or extra regenerated Energy. They will appear on the sides of the road where the hero is fighting will appear. Currently, there are 4 types of clickables that can appear.

In Clicker Heroes 2 game, Skills are abilities that can be activated to make game progress  quicker and easier.